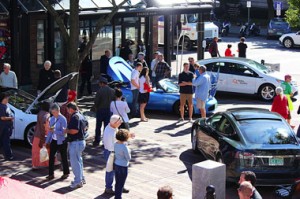 National Drive Electric Week, September 15-21, 2014, is a nationwide celebration to heighten awareness of today’s widespread availability of plug-in vehicles and highlight the benefits of all-electric and plug-in hybrid-electric cars, trucks, motorcycles, and more. They are fun to drive, are less expensive and more convenient to fuel than gasoline vehicles, are better for the environment, promote local jobs, and reduce our dependence on foreign oil.

Started in 2011 as National Plug In Day with the simple idea to hold simultaneous events across the country on the same day, by popular demand we are expanding to an entire week of events and changing the name to emphasize the thing we all want to do: drive electric. We expect National Drive Electric Week 2014 will again grow to include more events in more cities with more drivers reaching out to share the many advantages of driving electric with the public.

Each event is led by local plug-in drivers and advocates and typically includes some combination of EV parades, ride-and-drives, electric tailgate parties, press conferences, award ceremonies, informational booths, and more. Plug In America, Sierra Club, and the Electric Auto Association serve as the national team providing support to the events throughout the country. We are pleased to partner with the many other organizations and individuals working to bring National Drive Electric Week to communities across the country.

In September, 2013, events across the United States and other countries celebrated the third annual National Plug In Day. Hundreds of local volunteers organized 98 gatherings that reached out to over 36,000 attendees. Nearly 3,000 electric vehicles owners showed their cars at local events to show that driving electric is a viable alternative to being held hostage to gasoline prices. Local owners and car dealers together provided over 2,700 test rides or drives to attendees.

National Plug In Day had a noticeable impact on the market. Nissan reported that September marked a record month of sales for the LEAF; spokespeople for the California electric vehicle rebate project noted that rebate requests set a record immediately after the weekend.

You may have noticed that people who drive the new plug in electrics can’t help smiling about it. We’re celebrating Drive Electric Week because these new vehicles are so much better, and we want to share the news. Come join us for an event where you’ll get to see and possibly drive an electric vehicle and learn from real drivers what they already know: