We bring the DJs and the silent disco wireless headset dance party to you! 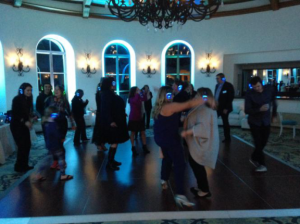 Santa Barbara’ Most Fun Wireless Headphone DJs Since 2003. Competitive Prices. Up To 3 Channels.

What is a Santa Barbara silent disco party?
The first thing that you might obviously ask is, “what exactly is a silent disco party?” Well, a silent disco party is the phenomenal way of organizing a public or private dj event which won’t be a trouble for anyone else. To conduct a silent party event, the music and the the instructions is done using high-quality headphones. Every individual participating in the event is provided with their own headphones which can be customised as per their needs.

Music as a form of therapy in medicine is not new. Its origins can be traced back to the late 1700s and early 1800s, according to the American Music Therapy Association, where essays on the “therapeutic value of music” began to appear in various medical journals. Throughout the following century, interest in music therapy grew, although it didn’t turn into an organized medical profession until the 1940s. Today, music therapy helps people of all ages with a variety of medical issues, ranging from autism to Alzheimer’s, and sessions are often uniquely individual, consisting of improvising, listening to music, singing, writing, or playing instruments. Studies have shown that music therapy is effective in reducing anxiety, as the process of listening to music can activate a person’s entire brain, creating a multi-sensory experience. From there, music can effectively impact a person’s emotion, mood, and cognitive functioning.

The origins of silent disco, however, are notoriously trickier to nail down; the trend has been linked to a 1969 Finnish science-fiction film called Ruusujen aika (A Time of Roses). It made headlines decades later in the late 1990s when The Flaming Lips promoted a headphones-only concert, and in 2005, when England’s Glastonbury Festival equipped guests with headphones and encouraged them to dance. In recent years, silent dance parties have spread to cities throughout the U.S., allowing partygoers to lower their inhibitions and become one with the music.

1. Enjoy your time without disturbing others
The biggest advantage of having a Santa Barbara silent disco party is that it can cause no disturbances to the neighborhood. Since the music is provided in state-of-the-art headphones, there is no noise pollution that used to be the common scenario in a traditional party. You can organize this silent disco party at your home and your neighbors can have no problems with this.

2. Less wiring means more people
With a silent disco party being organized in Santa Barbara, there is no need to place giant speakers and your dance floor won’t be covered with wires. You are going to get all the space which earlier was used to house speakers. This means more people can dance on the floor. Also, lack of extensive wiring means no embarrassing tangles and falling due to wires. The use of headphones makes your dance floor completely safe and spacious.

3. Music that caters to taste
We know that everybody has their own taste when it comes to music. A Santa Barbara silent disco party allows you to cater music to suit different tastes. Generally, there are three channels that you can tune your headphones to. Every channel plays a different genre of music and one can tune in to any channel at any time. Just choose the one you feel is worth tapping your feet to.