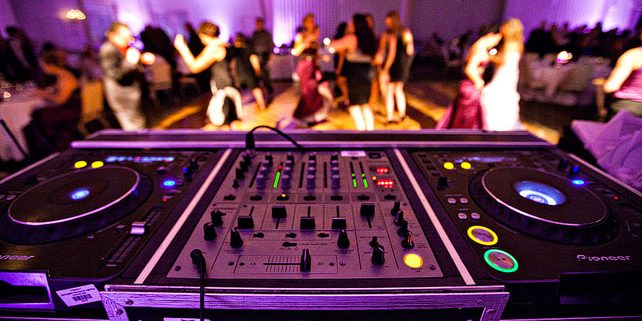 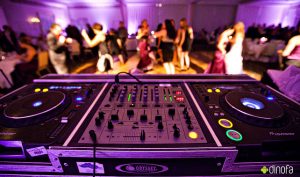 Everything Your Wedding DJ Wants You to Know
From how much to tip to what songs to request, these eight tips will make you your DJ’s BFF!

You’re getting married—and that calls for celebration that has everyone on their feet from cocktail hour until last call! The best way to do that? Craft a catchy playlist so people can’t help but spring out of their seats! From your first dance to the final steps, music sets the tone for the reception and has a heavy hand in determining your guests’ experience.

If you and your fiancé opt for a DJ instead of or in addition to a band, you’re putting the responsibility in their hands to ensure your wedding reception hits the right notes—literally! Along with finding an entertainment company that falls within your budget and has your wedding date available, you want them to be able to fluent in your favorite ‘90s boy band hits, understand what’s going to go down on the dance floor when your family does the Hora, or know that you’ll be expecting a heavy rotation of Dean Martin and Frank Sinatra to keep great aunt Jane happy.

No matter what you’re looking for, a DJ and their team should be able to work with you and your partner to make your wedding night special.

Here’s what two professional wedding DJs want you to know before you resort to letting Spotify control the tunes on your big day!

Know how to spot a fraud
We all know a guy who considers himself a DJ because he played top 40 hits at his frat’s parties in college. And the one who thinks being a DJ means only playing EDM and house music. “Technology now has enabled everybody to call themselves a DJ,”says Scott Siegel of Purple Parrot Entertainment. “Don’t just find somebody on Craigslist or some social media site and go by pricing. If it’s too good a price, you have to hope the person’s going to show up.”

Siegel suggests having a conversation with the DJ to learn more about their business and if they’ll be able to offer services that meet your specific needs (e.g. you’re a country crowd, but this company excels at hip-hop and R&B). “There are many guys who are like car salesman and they’re very forceful,” he warns. “They have these pre-programmed parties. They go in there, they’re not going to take requests, they’re not going to abide by the bride and groom’s wishes because they [think they] know better.”

Along with experience, ask to see pictures and videos of events any prospective DJ has worked. And finally, make sure they’re bringing legit equipment—not the same MacBook they went into freshman year with 15 years ago!

Don’t rely on WiFi
Siegel also cautions against letting your party playlist live on the internet. “Nowadays a lot of DJs are starting to say, ‘I’ve got 50,000 songs and they’re on the cloud,’” he says. “You know very well how many times have you gone to make a phone call somewhere and you can’t get a signal. There’s a chance you’re not going to be able to get a signal at that barn, the vineyard, or a catering hall. Or if you go to a catering hall and the venue says, ‘I can’t give you our password.’” Instead, go with a DJ who not only has all of their songs downloaded, but also has a backup drive in case of emergency.

Figure out your DJ’s preferred form of communication
Can’t get that Justin Bieber remix you just heard on Pandora out of your head? Siegel wants you shoot him an email right then and there if you want to add it to your wedding rotation. “I‘ve always told prospective brides, my phone’s always open. Call me, email me. If you heard a song on the radio and love that song, call right now,” he says. “For me to write it down in my notes is no big deal, but you could forget about it in five hours. I like to keep the line of communication open.”

But Allstar DJ’s Paul Groh prefers his clients to compile their requests and notes (e.g. “Please shout out cousin Mike’s 30th birthday.”) in one email or Word document and send it to him no later than two weeks before the wedding. “We recommend they do not text or email bits and pieces of what they want for their wedding,” he says. “We get bombarded with online stuff and it gets lost. Everything should just be in one document. Get the DJ all of the information two weeks before because if they’re working Friday night and you have a wedding Saturday morning, they have no time to plan it out.”

So find out which method your DJ would prefer and make sure not to annoy them with 1 a.m. texts from the bar when you hear a Lizzo jam you just have to dedicate to your former roommate if they’re not into it.

Let your DJ know who will be in attendance
Whether your reception will consist of mostly friends, your parents’ friends, or family of all ages, inform your DJ so they can be prepared with music that’ll please that specific crowd. “I hear it all the time when I’m DJing for senior citizens,” Siegel says. “They come up to me and say, ‘I went to my niece’s wedding, and they didn’t play anything [I like] and I sat there all night. And it was so loud!’ I like to know the entire room. I like to find out how many guests do you plan on having? What’s the demographic? Don’t walk in and think that they’ve got everything and know anything because there are more DJs out there that know the current house music and that’s it. If I’m going into a party that’s very Latin heavy, I need to know that music.”

Try not to request too many songs
While providing input such as, “We love ‘80s rock!”; “Our friends go crazy for Rihanna!”; or “Throw some Barry Manilow in there for my stepmom,” helps guide your DJ in the right direction, couples don’t need to make too many specifications. “You’ve got to trust their judgment,” Groh says. “Give them 10 or 20 of your favorite songs and let them do the rest of the work. And if you want to see dancing, make sure the songs are danceable. Sometimes people, what they hear on the radio, it may not be something that’s good for dancing, but the DJ knows.”

Be flexible with “do not play” songs
In a similar vein, be open to accommodating your guests’ requests, even if it’s not what you want to hear. “It’s very common for brides and grooms to say, ‘Please don’t play any line dances,” Siegel says of tracks like “Cupid Shuffle” and “Macarena.” “What do you want me to tell somebody if somebody comes up—your aunt or uncle—and they want to hear the ‘Cotton Eye Joe’? Maybe say, ‘No line dances but if somebody asks then you can play it.’ Because the reality is, most of the songs are three minutes. We’re not going to go and play 20 of them. We’re not going in planning on playing on them, but if somebody does ask, there are more times when somebody may be more amenable to doing something.”

Feed the DJ and their team
“Ask how many staff members are coming and have a meal ready for them,” Groh suggests. You can’t perform if you’re hungry. You get grouchy. It’s not a good thing.” If you can’t budget meals for the entertainment company and other vendors, offer to let them eat during cocktail hour. “If the DJ is doing the ceremony, the cocktail hour, the four-hour event, and the after-party, it could be six, seven, eight hours plus setup and take down before they’re eating,” Siegel says. “It is courteous to feed or at least to offer to feed the entertainment.”

Don’t feel obligated to tip
At the end of the night, though, couples shouldn’t feel pressured to provide an additional tip. But they should check if their contract signed requires one. “It’s at the sole discretion of the client,” Groh says. “For excellent service, somewhere between 10 and 20 percent, but we leave it up to their discretion. It’s not required.”

If newlyweds do decide to tip, they can put someone else in charge of the responsibility, or dole it out in the middle of the party. “Maybe have their mom do it, maybe have their sister do it or their brother,” Siegel adds. “At the end of the night, truthfully, the bride and the groom have a lot of other things on their mind. So if they do plan on it, maybe during the night give the DJ an envelope and say, ‘I want to give this to you now because I’m going to be busy later. Thank you so much for being a part of our wedding.’ If you’re giving it to the guy during the night, if he’s doing a good job, he’s doing to step up his game a little bit more.”