According to Wikipedia, Robert Leland “Bob” Eubanks (born January 8, 1938) is an American television/radio personality and game show host, best known for hosting the game show The Newlywed Game on and off since 1966. Eubanks received a star on the Hollywood Walk of Fame for his television work in 2000.[1] The star is in front of Grauman’s Egyptian Theatre, where Eubanks worked during the first years of his broadcasting career.[2][3] In 2005, he received a lifetime achievement Emmy award from the Academy of Television Arts and Sciences. 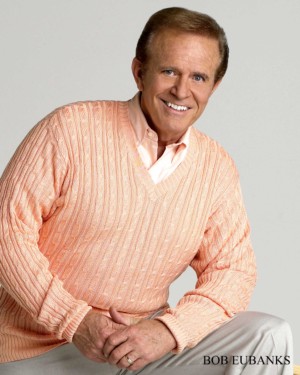 Eubanks was born in Flint, Michigan, but was raised primarily in Pasadena, California, where he grew up listening to music, most notably favorites like Frank Sinatra and Doc Watson. His parents, John and Gertrude (née McClure), were originally from Missouri. They moved to Flint during the Great Depression, where their only child was born, before moving on to California. The young boy became a child model, doing photo shoots for ads and meeting his idol, Gene Autry, when he was scheduled to do an ad photo shoot with him.

He watched popular classic television and quiz game shows. Also growing up in the 1940s and 1950s, he was influenced by Cary Grant, Howard Hughes, Buddy Hackett and Bill Cullen. He attended Pasadena High School, where he graduated in 1955. After graduation from high school, he would become one of California’s most popular disc jockeys. In 1956, his first radio exposure was at KACY Radio in Oxnard, California. For most of the 1960s, while working the midday shift at KRLA in Pasadena, he was also a producer of concerts, such as The Beatles 1964 and 1965 Hollywood Bowl performances,The Rolling Stones, during the first two years of the American tour.[9] While still in Los Angeles, he also produced such artists as Barry Manilow, The Supremes, Dolly Parton, Bob Dylan, Elton John and Merle Haggard, among others.

Eubanks married Irma Brown, an avid athlete, ranch forewoman and artist, on September 10, 1969. They had three children: Trace, a retired firefighter; Corey, a stuntman; and Theresa.[11] In 1970, the couple purchased a 20-acre (81,000 m2) portion of a working cattle ranch, and later expanded it to 26 acres (110,000 m2).The entire family enjoyed roping and riding, with Eubanks participating in rodeos during his spare time.Eubanks is a gold card member of the Professional Rodeo Cowboys association. Irma handled interior decorating, landscaping, and mounting one to two equestrian shows a year. Irma died in 2001 after a prolonged illness.

At some point after 2001, Eubanks married Deborah James. James is a wedding/events coordinator in Ventura, California and has her own company, Bella Vita Events. The couple has a young son, Noah.[5][11] In October 2010, Eubanks and his wife put their Westlake Village, CA home on the market.

The Newlywed Game and Country Music business
In 1966, he received a phone call from Chuck Barris to host a new game show, The Newlywed Game, which premiered on ABC that same year. During its debut, it was an immediate hit, and the show’s popularity led the network to expand the prime-time lineup, where it had run on the air for five years. Only 28 years old when he started hosting, Eubanks became widely popular for bringing a youthful energy to daytime television, pressing contestants into giving embarrassing and hilarious answers. The Newlywed Game was also ranked as one of the top three daytime game shows, for five consecutive years, between 1968 and 1973, and was ranked in the top three prime-time game shows, also for five years, between 1966 and 1971.

While hosting The Newlywed Game, Eubanks was known for using the catchphrase “makin’ whoopee”, in reference to sexual intercourse. It was Eubanks who coined the term from the song of the same name, in an attempt to keep parents with young children from the need to explain the facts of life because of a television show. While his network was comfortable with the term “making love”, they did not allow the use of the word “panties”.

While not taping, he also pursued a career in the country music business, where he served as manager of such artists as Dolly Parton, Barbara Mandrell and Marty Robbins.[10] The same year, he also signed Merle Haggard to an exclusive live-performance contract, producing more than 100 dates per year with the performer for almost a decade. His first ending of his first-run network TV show, The Newlywed Game, ended in 1974, after 2,195 episodes, making Eubanks one of the most beloved and bankable game show hosts to date. He also hosted various editions in syndication, from 1977–80, 1985–88 and 1997-99.[10] For Series Two of the 2009 GSN revival, Eubanks hosted a celebrity charity episode with first host Carnie Wilson and her husband Rob Bonfiglio playing against Carnie’s sister Wendy and her husband Daniel Knutson, and their mother Marilyn Wilson-Rutherford and her current husband Daniel Rutherford. In spring 2010, Eubanks hosted another episode of The Newlywed Game, subtitled the “Game Show Kings” episode. This episode featured Monty Hall and his wife Marilyn Hall, Peter Marshall and his wife Laurie Stewart, and Wink Martindale with his wife Sandy Martindale. This makes him the only person to host the same game show in six different consecutive decades (1960s, 1970s, 1980s, 1990s, 2000s and 2010s).

In 1988, Eubanks left The Newlywed Game to pursue other interests (even though he was still hosting Card Sharks on CBS for another 7 months) and was replaced by Paul Rodriguez.

Other game shows:
After Newlywed Game, he hosted a number of other game shows in his career, including Rhyme and Reason, Dream House, The Diamond Head Game, Trivia Trap, and Powerball: The Game Show.[3][14][15]

In 1985, Mark Goodson hired Eubanks, a second time (the first being the aforementioned Trivia Trap), to host a revamped version of the show Card Sharks for CBS.[16][17] Eubanks hosted Card Sharks throughout its CBS run from 1986 until its demise in 1989.[12] Prior to hosting Card Sharks, he appeared as a special guest on the original NBC version alongside Jim Perry to promote his 1979 game show All Star Secrets, which he also produced.

His final network game show was Family Secrets. In recent years, he has hosted or co-hosted all five of NBC’s Most Outrageous Game Show Moments specials. Eubanks was also one of three rotating hosts (along with Chuck Woolery and Jamie Farr) of the “$250,000 Game Show Spectacular” at the Las Vegas Hilton until the show closed in April 2008.

Besides producing Hill-Eubanks’s All Star Secrets, the company also produced The Guinness Game in 1979-80, The Toni Tennille Show in 1980, Buddy Hackett’s You Bet Your Life revival in 1980, and Infatuation (which Eubanks also hosted) in 1992. Between 1994 and 1995 Eubanks also travelled to Britain to host a British version of this series, Infatuation UK, (produced by Thames TV) for UK cable network Living TV. Eubanks tried acting, but found he was not good at doing lines; he also learned the game show business was far more lucrative and less confining.

Ellen and Portia play the Newlywed Game for FUN

Bob talks about The Rolling Stones…
I really thought that Mick Jagger and I were oil and water so I was very surprised when the following year, we got a call asking if we wanted to do the Stones again. This time they wanted to play the larger Long Beach Arena, with a capacity of about 14,000. Since time has a way of healing and being concert promoters, we said yes.

Once again, our major problem was security and once again it looked like an armed camp all around the building. Jagger came to me before the show and said that it was important that they leave immediately after the concert to catch a helicopter shuttle to a television show in Hollywood. We had a little car waiting for them inside the building to take them down a loading ramp with a motorcycle escort to deliver them to the waiting helicopter. I said, “No problem. All you have to do is get off stage.” He assured me that they would do everything they could to make that happen.

The concert was crazy. Girls were screaming and running down the aisles, trying to get on stage. The police even pulled a young lady off a drainpipe that she was trying to shimmy up to get into the building. The music was incredible. But now came the test. We had the little station wagon backstage and the motorcycle police were outside the building waiting at the bottom of the loading ramp, but once again, Mick couldn’t resist hanging around the stage!

With the delay, by the time we got Mick into the station wagon, there was a huge group of kids outside the building. The driver of the car panicked, went down the wrong ramp and was immediately engulfed with thousands of kids. I remember looking down and seeing a mound of girls covering the station wagon with one policeman up on the top being mauled. The Stones were on their backs with their feet up against the car’s ceiling to keep the roof from being pushed down on them. I actually saw a little girl’s foot get run over, but she acted as if nothing happened. It was pure pandemonium. The police somehow finally managed to break the station wagon loose.

That was the last that I ever saw of the Rolling Stones.